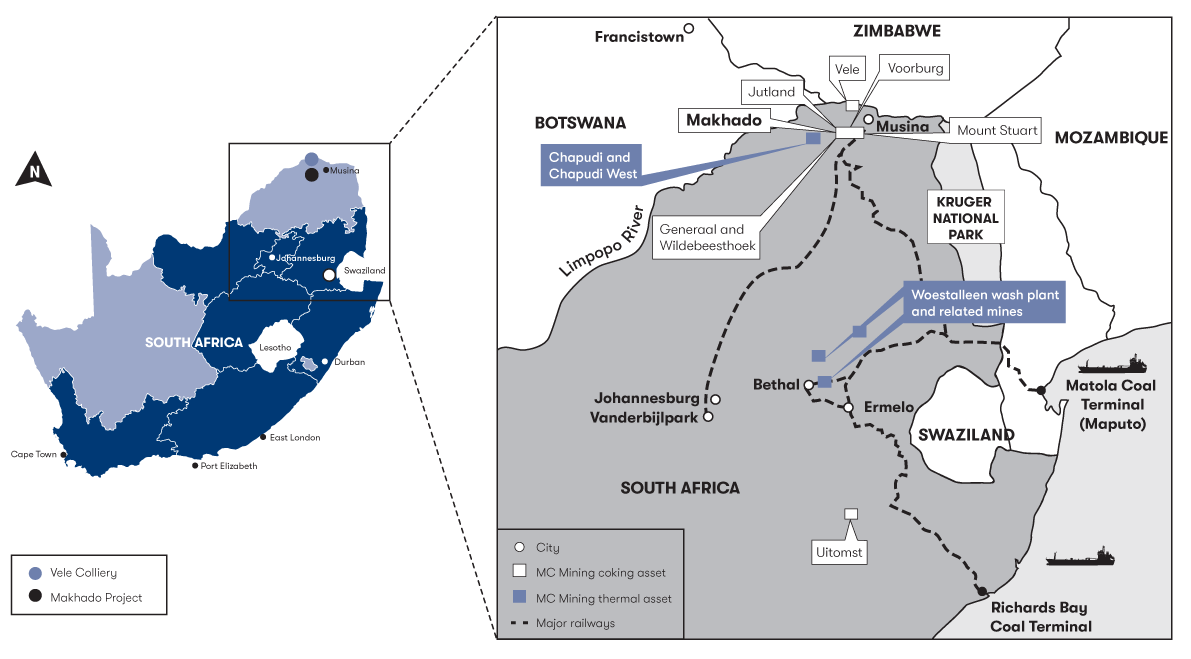 Makhado Project (95% owned - 69% post-Black Economic Empowerment transactions; Industrial Development Corporation of South Africa Limited (5%)). MC Mining’s flagship Makhado hard coking and thermal coal project in the Soutpansberg coalfield in the Limpopo province is situated 36km north of the town of Makhado and 80km southeast of the Vele Colliery. The phased development of the Makhado Project will ensure continued scalability. Phase 1 will see the mining of the west pit with the coal processed at the existing Vele Colliery processing plant, which will be modified accordingly. The construction of Phase 2 (previously known as the Makhado ‘Lite’ Project), east and central pits and Makhado processing plant, is expected to start in circa CY2022.

Phase 1 includes modifications to the existing Vele Colliery processing plant and the development of the Makhado west pit which has a nine-year life of mine. The approximate 3.0 million tonnes per annum (Mtpa) of run of mine (ROM) coal from the west pit will be scalped, removing the coarse parting and waste, and the resulting approximately 2.0Mtpa of coal will be transported by road to the Vele Colliery for further processing.

The Vele plant modifications will facilitate the simultaneous production of hard coking coal (HCC) and an export quality thermal coal, producing approximately 1.1Mtpa of saleable coal comprising 0.54Mtpa of HCC and 0.57Mtpa of thermal coal. An off-take agreement with one of the world’s largest bulk commodity production and marketing companies for the Phase 1 thermal coal was concluded during April 2019. MC Mining anticipates completing the Phase 1 composite funding arrangements during Q3 CY2019, facilitating the commencement of construction later in the same quarter, with production anticipated in June 2020.

Following the nine-month construction period, Makhado will be the only significant HCC mine in the country. The project will also provide significant direct and indirect benefits to communities located in an area. Makhado is expected to create approximately 650 permanent job opportunities, noteworthy in an area currently experiencing significant unemployment levels.

The development of Phase 2 in circa FY2022 which includes the mining of the east and central pits, Makhado processing plant and related infrastructure, will produce an estimated 4.0Mtpa of ROM coal yielding 1.6Mtpa to 1.8Mtpa of saleable product. 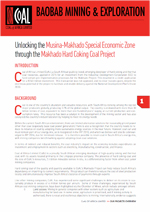